PSP IT wins Small Business of the Year 2016

PSP IT will now go forward to represent Lincolnshire in the national finals, which will take place in London in November.

Simon Beardsley, Chief Executive of the Lincolnshire Chamber of Commerce said: “It is wonderful news and no surprise that our member PSP IT have won this award. They are a fantastic business which has completed outstanding work for a range of clients in Lincolnshire and far beyond. We’re delighted they will be representing Lincolnshire in the national finals and wish them the best of luck.

“The British Chamber of Commerce Business Awards provide a great opportunity to celebrate the success and achievements of local businesses, and it’s something which we as a local Chamber are proud to represent”.

Since forming in 2008, PSP IT have gone on to achieve a string of successes which have included winning prestigious awards such as ‘Best Use of IT & Communications’ in 2013 at the South Holland Business Awards.

After scooping the top award – Business of the Year in 2014, PSP IT went on to support the South Holland Business Awards pledging its support as headline sponsor in 2015 & 2016.

Recognition as an industry leader has led to growth and the purchase of a second building to allow for expansion.

“PSP is delighted to have won such a prestigious award and now look forward to going to the finals later in the year. I would like to pass on my sincere thanks to the whole team at PSP and to our valued customers for making this possible.  I am truly so proud that for once words fail me.”

All national winners will be announced at a Gala Awards Dinner on Thursday 24 November at the Brewery in London. 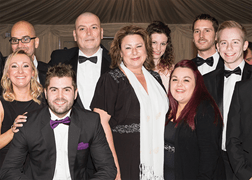